The internet survey opened with a brief demographic questionnaire and used a combination of forced-choice and fill-in-the-blank items across 3 separate constructs, which included The Maslach Burnout Inventory – Human Services Survey (MBI-HSS), the Self-Care and Lifestyle Balance Inventory, and the Substance Use Screening Inventory. The survey took approximately 15-25 minutes to complete. In order to protect against the same person taking the survey twice, URL’s and/or IP addresses were used by the survey host to identify participation; however, the survey host was asked to remove all identifying information and all URL’s and/or IP addresses were deleted and disembodied from their respective responses prior to data analysis. Therefore, all participation was considered anonymous. Data collection was completed by August 1st, 2011.

Hypothesis 1: It is hypothesized that there will be a negative correlation between self-care and burnout.

Hypothesis 2: Based on the self-medication theory and gender differences identified in the literature (Weiss et al., 1992), male psychologists who work in high-stress settings, (i.e., private practice, dealing with managed care, community healthcare, and working with forensic populations), will report increased use of self-medication behaviors as compared to their female counterparts.

Hypothesis 3: It is hypothesized that psychologists who endorse burnout will also report some variation of substance use (alcohol, tobacco, caffeine, and/or recreational use).

Hypothesis 4: It is hypothesized that psychologists who endorse the positive items on the self-care portion of the questionnaire related to personal self-reflection fostered by healthy, supportive relationships will report less burnout than those who lack this kind of a positive outlet.

To address Hypothesis 1, a bivariate correlation analysis was used to evaluate the degree of relationship between self-care and Burnout. Simple correlation analysis revealed that Self-Care Inventory scores were negatively related to MBI scores (r = -.45; p< .01), suggesting that as self-care increases, burnout decreases (see scatter plot). Thus, evidence was found to support this claim.

Bivariate correlations were used to evaluate the degree of relationship between MBI (e.g., burnout) scores and self-medication practices (Hypothesis 3). The bivariate analysis revealed no correlation between MBI scores and single use of alcohol (r = -.01; p = .82), caffeine use (r = .06; p = .37), tobacco use (r = -.03; p = .62), and/or recreational drug use (r = -.04; p = .52). However, the bivariate correlation involving burnout and substance use revealed that MBI scores were positively related to intoxication by alcohol (r = .25; p<.01), suggesting that as burnout increases, so does the number of reported instances by psychologists involving intoxication by alcohol.

In response to Hypothesis 4, another bivariate regression was used to evaluate the degree of relationship between healthy, supportive relationships and Burnout. The results revealed that MBI scores were negatively related to activities of self-care involving participation with a healthy support system (r = -.35; p< .01), suggesting that as healthy supportive relationships increase, burnout decreases. Thus, evidence was found to support this claim. 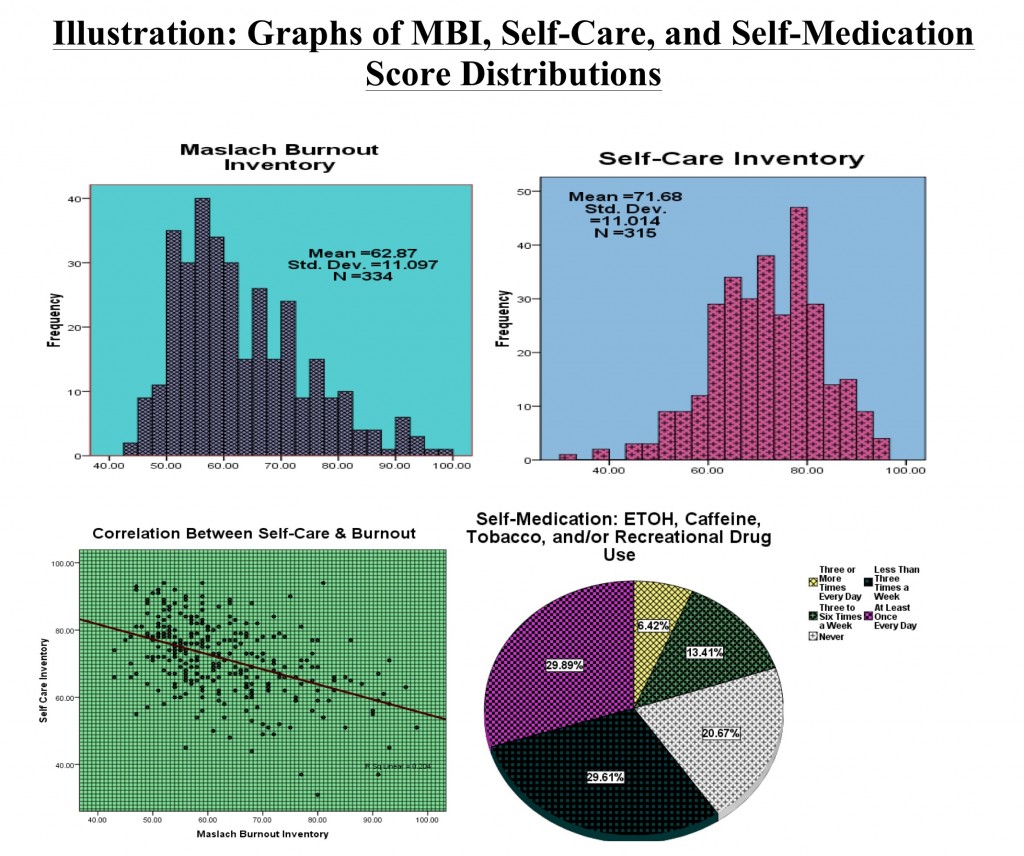 Self-care should be taken seriously for personal and professional health maintenance. Given the harm that professional impairment can produce, it was practical to assess the variables that can impact and shape licensed psychologists’ practices and their ability to adequately and appropriately cope with stress. The fact that increased self-care practices have the potential to thwart professional impairment, it is imperative to offer psychologists support for the benefits of such practices, especially to those psychologists who practice in higher risk settings. Through acknowledging the value of exercising routine self-care, the proposed objective in presenting this research is to help psychologists restore themselves and flourish both personally and professionally.

[box] 1. Have you ever experienced signs or symptoms of burnout or known someone who has? If so, what was your experience in decreasing burnout? What seemed to work? What did not?[/box] [box] 2. In your own opinion, what can agencies, organizations, and behavioral health persons realistically do in order to preemptively and proactively decrease and/or prevent burnout?[/box]