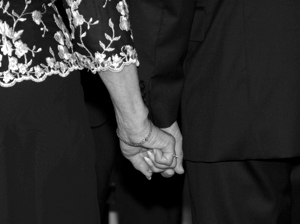 Sexual health is an important part of well-being in later life. However, misconceptions based on ageist stereotypes and lack of understanding has often led to avoidance of this topic. The result may be a missed opportunity to support an important aspect of successful aging.

What is the “truth” about aging sexuality? First, sexual expression occurs across the lifespan and continues to provide several physical, emotional, and social benefits for those engaged. For instance, an active sexual life has been associated with lowered pain sensitivity, better cardiovascular health, increased relaxation, decreased levels of depression, increased well-being, and increased intimacy/closeness (e.g., Cyranowski, Bromberger, Youk, Matthews, Kravitz, & Powell, 2004; Jannini, Fischer, Bitzer, & McMahon, 2009). Also, the majority of older adults say that sexuality is an important aspect of successful aging and integral to a quality relationship (AARP, 2010). Although there can be changes in sexual behaviors and desires over time, older adults are engaged in a spectrum of sexual and intimate activities. In large, nationally representative studies of older adults (Waite, Laumann, Das, & Schum, 2009), a significant number of adults continue to participate in sexual behaviors through the age of 74 (“any sex”: 39.5% of women and 67% of men), with more of a decline between the ages of 75 and 84 (“any sex”: 16.7% of women and 38.5% of men).

Unfortunately, many of the risks of sex also remain relevant in later years, as we have seen with rising rates of sexually transmitted infections (STIs) among older adult populations (CDC, 2013). Studies have shown that use of protection is lowest among older adults, and this is not solely due to many older adults being in long-term monogamous relationships, a common, albeit misconceived, reason for foregoing protection. In fact, a study conducted by AARP (2010) found that only 1 in 5 sexually active singles over 50 uses a condom regularly. This is due to issues such as poor sexual education for seniors about the importance of protection post-menopause and their reported lack of self-efficacy in using sexual protection, including condom use and negotiation skills).

The bottom line is that sexuality in later life should not and cannot be ignored given the importance to older adults and the associated benefits and risks. What can we do as psychologists? First, we need to become aware of our own biases and misconceptions about aging sexuality. Several good resources exist to get education about the realities of sexuality in later life and pursue awareness of our own values about aging sexuality (see AARP website; DeLamater, 2012; Hillman, 2012; Syme, Cordes, Cameron, & Mona, 2014). Also, a recent set of blogs on sex in later life was published by the American Society on Aging (ASA) that covered several important sexual topics and provided resources (see website below).

Thankfully, we do not have to be experts on aging sexuality and/or sex therapy to be effective with our clients. We can provide a quick screening question, brief education and recommendations, and/or a referral to a specialty service (e.g., sex therapy, sexual medicine, etc.). The PLISSIT model is a just such a screening process developed in the nursing field, which provides a basic screen, educate, and refer-as-needed framework (see Annon, 1976 and PLISSIT website below). The different components are: P – giving permission to the client to talk about sex, LI – providing limited information about general or specific aging sexuality issues, SS- providing specific suggestions to follow for brief treatment or referral, and ending with, if needed, IT – intensive therapy by a qualified professional to address sexuality concerns.

If we are comfortable with our level of knowledge and expertise in this area, there are a few specific tasks that may be necessary. Regarding sexual risk and supporting sexual health, we may need to re/educate our older adult clients about the impact of age on sexual expression, common sexual risk and protective practices, and potentially how to build sexual health skills and self-efficacy around use of protection (e.g., how to negotiate condom use).

Often, we need to serve as an advocate for our patients/clients in inter- or multidisciplinary settings. This role may include establishing the importance of addressing sexuality in later life as part of successful aging. Also, we may be training providers and staff to skillfully talk about sex in later life with their patients (e.g., normalize, dispel myths, provide basic facts). Advocacy may also include empowering our clients to know more about their own sexual health and be able to talk about it with other providers.

There are many ways in which we can serve older adult clients in pursuing their sexual health goals. The following are resources for more information and tools that we can use to start or continue supporting sexual health across the lifespan.

Dr. Syme earned her doctoral degree in counseling psychology from the University of Kansas and completed her clinical training at VA Long Beach (internship) and VA Boston (postdoc in geropsychology). She is currently a part-time geropsychologist for VA San Diego and is starting as an assistant professor of Gerontology at Kansas State University in the fall.

Annon, J. (1976). The PLISSIT model: A proposed conceptual scheme for the behavioral treatment of sexual problems. Journal of Sex Education and Therapy, 2(2), 1-15.

Centers for Disease Control and Prevention (2013). HIV among older Americans. Retrieved from: http://www.cdc.gov/hiv/risk/age/olderamericans/