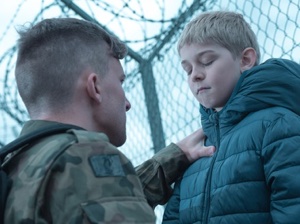 by Candice A. Alfano & Simon Lau, Department of Psychology, University of Houston

A common saying in the military is that when one person joins the whole family serves. This phrase took on new meaning in the wake of the events of September 11, 2001. Subsequent combat operations required unprecedented rates of lengthy and repeated service member deployments. For many military families, geographic relocations, disrupted family routines, financial hardships, and fear of losing a loved one became a way of life. Major military operations in Iraq and Afghanistan have since ceased but the resulting instability of the Middle East almost certainly ensures future intervention.

In light of the fact that an entire generation of youth have grown up during a time of war, we recently examined what is known about the impact of parental deployment on children in military families (Alfano, Lau, Balderas, Bunnell & Beidel, 2016). Consistent with studies documenting an increase in the use of mental health services among children of active-duty service members during the past decade (e.g., Gorman, Eide, & Hisle-Gorman, 2010; Millegan, Engel, Liu, & Dinneen, 2013), we found ample evidence for elevated rates of mental health problems, academic struggles, and/or family and peer conflict among children who have experienced parental deployment.

Findings are not entirely consistent, however. A majority of studies link increased rates of mental health problems with parental deployment, but others have failed to find such relationships (e.g., Morris & Age, 2009). Further, many studies documenting significant associations have not included appropriate comparison groups and/or failed to contrast child-based outcomes with age-based normative data. The extent to which significant findings might also be attributed to differences in measurement, sample characteristics (e.g., service branch), family composition, available social support, and/or number and length of deployments has rarely been investigated empirically.

Our overall review produced several pivotal questions for future research, organized into four broad themes. The first calls for greater methodological rigor in assessing child-based outcomes, starting with the use of validated assessment instruments. Specific concerns relate both to a potential for over-pathologizing normative, transient stress reactions in children as well as failures to detect more subtle signs and symptoms of distress.  Overreliance on parental reports is an addition concern given established relationships between psychological symptoms in children and in at-home caregivers (e.g., Chandra et al., 2010; Flake et al., 2009; Lester et al., 2010). For the most part, research has focused on child maladjustment and psychopathology rather than coping strategies and resilient outcomes, understanding of which would yield a more complete picture of risk.

A second theme centers on the need to parse developmentally-specific risk from the effects of multiple deployments. Emotional and behavioral risk associated with having a deployed parent appears to intensify with age (Chartrand et al., 2008; Gorman et al., 2010). While older children are better able to comprehend the risks that accompany a deployment, they are also more likely, by virtue of their age, to have endured multiple separations and/or to know of other deployed parents who did not return home (or returned home a different person). Several studies have indeed shown magnitude of child emotional/behavioral risk to correspond with number/duration of parental deployments (e.g., Barker & Berry, 2009; Pfefferbaum et al., 2011).

Another critical distinction must be made between children from active-duty versus National Guard/Reserve (NGR) families. Among a host of benefits available to active duty families is an education system tailored for military families. Children of NGR service members often live far from military bases, have few friends from military backgrounds, and attend schools with peers and teachers not familiar with the struggles of deployment. Unsurprisingly, the latter group of children experience greater levels of loneliness and social disengagement as compared to the former (Castaneda et al., 2008; Chandra et al., 2008). Effective support and intervention services for these two groups of children may in turn differ.

Programs aimed to reducing risk and increasing protective influences among military-affiliated youth have proliferated in recent years. Efficacy research has advanced at a much slower rate, however. Our review points to several foci worthy of specific attention. Mental health in the at-home parent clearly serves to moderate child outcomes. Parental support in the form of everyday engagement, open and sensitive communication, and monitoring emerges as a critical protective factor during deployment periods (Morris & Age, 2009). Family-based approaches are preferential therefore to individual interventions.

In sum, while there is agreement that the emotional health and well-being of children from military families should be a national priority, development of effective prevention/treatment programs hinges on research that delineates clear entry points for intervention. Equally essential is a consideration of the range of developmental, parental, and broader contextual factors that serve to influence how children both struggle and cope with the deployment of parent.