Based on this knowledge, our team at Yale created an identity-affirming psychotherapy to reduce the cognitive, affective, and behavioral mechanisms through which stigma erodes sexual minority men’s mental health. This treatment is called ESTEEM (Effective Skills To Empower Effective Men) and is based on the treatment structure and sequence of the Unified Protocol. The Unified Protocol was developed to address the common cognitive, affective, and behavioral mechanisms underlying several mental and behavioral health problems in the general treatment-seeking population. Therefore, this particular treatment platform lends itself well to addressing the minority stress reactions shown to underlie sexual minority men’s disproportionate risk of mental and behavioral health problems. Our team consulted with several dozen LGBTQ+ community members and mental health providers to adapt the Unified Protocol to be LGBTQ-affirmative and appropriately address minority stress.

We administered surveys and interviews to all participants at baseline and then at 4-months, 8-months, and 12-months post-baseline to determine changes in the following mental and behavioral health outcomes:

Outcomes were primarily analyzed as change from baseline assessment to 8-months post-baseline and are presented in the table below. 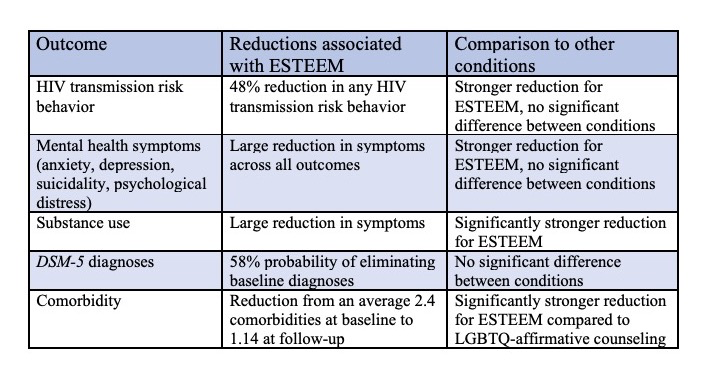 Overall, ESTEEM was associated with improvements in all mental and behavioral health outcomes and stronger reductions in all outcomes compared to the other two conditions. Notably, ESTEEM was developed as a transdiagnostic treatment to address idiosyncratic symptom presentations; results supported its efficacy in doing so, demonstrating that ESTEEM yielded significantly stronger reductions in comorbidities compared to LGBTQ-affirmative counseling.

Because ESTEEM is a transdiagnostic treatment approach, we assessed numerous outcomes and decided – ahead of time in preregistered disclosures –  to adjust our statistical significance value for the number of analyses we performed. This reduced the trial’s ability to find statistically significant effects. Nonetheless, the overall pattern of results support the promise of ESTEEM. For instance, effect sizes for condition comparisons favored ESTEEM for every outcome and were in the small-to-moderate range – similar to or larger than most existing interventions for gay and bisexual men’s mental and behavioral health reported in a recent meta-analysis. Future trials that examine multiple outcomes might consider analytic approaches that assess changes in idiographic symptom presentations – e.g., reductions in only those problems with which participants present – rather than examining all outcomes for all participants and thereby reducing statistical power to detect effects.

Additional trials have tested the efficacy of this treatment as adapted for sexual minority women, Black and Latino gay and bisexual men in community settings, and Chinese gay and bisexual men. These trials show similar success to the ESTEEM approach described above. Together, these results present ESTEEM as an evidence-based approach for delivering LGBTQ-affirmative care. ESTEEM represents one of the few evidence-based approaches for enacting professional guidelines for LGBTQ-affirmative care, such as the APA’s recently released Guidelines for Psychological Practice with Sexual Minority Persons. Future research will determine which groups of sexual minority men are particularly likely to benefit from this treatment and will seek to identify optimal ways to implement ESTEEM in real-world settings to meet the needs of the diverse LGBTQ+ community. 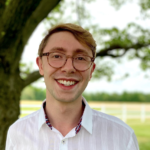 Ben Eisenstadt (he/him/his) is a Postgraduate Associate for the LGBTQ Mental Health Initiative at Yale School of Public Health. His research interests include optimizing mental health treatment benefits for LGBTQ+ subpopulations as well as understanding how communities can support transgender and gender diverse mental health. He plans to apply to Ph.D. programs in clinical psychology in the fall of 2022. Ben can be contacted at ben.eisenstadt@yale.edu.

Dr. John Pachankis (he/him/his) is the Susan Dwight Bliss Professor of Public Health and Psychiatry at Yale University and the director of Yale’s LGBTQ Mental Health Initiative. His research examines the mental health of LGBTQ+ populations and the efficacy of LGBTQ-affirmative mental health interventions. He has published 150+ scientific papers on LGBTQ+ mental health and stigma and co-edited the Handbook of Evidence-based Mental Health Practice with Sexual and Gender Minorities (Oxford University Press).