Can Happiness Make Us Healthier? Evidence from a Randomized Controlled Trial

Being healthy is good for happiness, but does happiness also lead to better health? Correlational research shows that people with more positive emotional styles are three times less likely to develop symptoms of a cold or flu after deliberately being exposed to the rhino or influenza virus (Cohen, Alper, Doyle, Treanor, & Turner, 2006). And in a famous longitudinal study, nuns who expressed the most positive emotions in essays in their 20s lived about 10 years longer than nuns expressing the least positive emotions (Danner, Snowdon, & Friesen, 2001).

Correlation, of course, is not causation. Controlled lab experiments—the gold standard in establishing causality in research—would, however, seem a poor tool for establishing the long-term effects of happiness on health. For causal evidence, we must therefore look at randomized controlled trials (RCTs).

In five RCTs, for example, treatment for depression modestly improved physical health outcomes (O’Neil, Sanderson, Oldenburg, & Taylor, 2011). But the lack of negative emotions is not the same as the presence of positive emotions, and we already knew that negative emotions and stress are bad for our health (Cohen, Janicki-Deverts, & Miller, 2007).

To examine whether happiness has a causal impact on health, we thus conducted a six-month RCT with a nonclinical population of 155 community adults of average physical and mental health. We designed a 12-week positive psychological intervention—ENHANCE—focused explicitly on increasing happiness rather than treating mental illness.

In a paper published in the journal Psychological Science, we found that our positive psychological intervention had beneficial effects on self-reported physical health (Kushlev et al., 2020). Following the treatment phase of the trial, participants in our intervention reported fewer days in which they felt sick in the past month compared to a waiting-group control.

In a subsample of 100 participants, we were also able to explore the effect of treatment on the number of sick days participants reported each week over the course of treatment. Even at this more granular level, participants in our positive psychological intervention reported fewer sick days (Figure 1). Notably, participants in both conditions experienced an increase in the number of sick days during Weeks 4–6 of the study, coinciding with the start of the winter flu season in the northern hemisphere (October 2016). This pattern suggests that happiness does not somehow magically make people impervious to getting sick, but simply that happiness can be a protective factor in physical health. 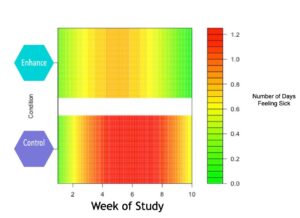 Figure 1. Number of sick days reported during each week over the course of treatment for ENHANCE (a positive psychological intervention) and control. Treatment for the subsample of 100 participants shown here lasted from September 2016 to December 2016, encompassing part of the yearly flu season in the northern hemisphere.

ENHANCE included only evidence-based psychological tools and exercises. The first three weeks of the program focused on the Core Self, which helped individuals identify their values, strengths, and goals. The second part of the program, the Experiential Self, focused on emotion regulation and mindfulness and gave participants tools to identify maladaptive patterns of thinking. The final four weeks of the program focused on the Social Self and taught individuals’ techniques to cultivate gratitude, foster positive social interactions, and engage more with their community.

We deliberately did not include any modules on health behaviors that can directly improve health, such as sleep or exercise. In addition, we were able to statistically show that the improvements in health were preceded by increases in positive affect. Thus, we could be reasonably confident that positive emotions played a role in the observed improvements in self-reported health.

All participants in the trial completed weekly modules that included an hour-long lesson with information and exercises on target principles of happiness, including a weekly writing assignment and an active behavioral component like practicing guided meditation. Some participants (n = 55), however, attended in-person weekly group sessions led by a trained clinician, whereas the rest (n =100) completed the same modules individually online using a customized web platform. The magnitude of the observed effects was consistent across the two arms of the study. Our findings thus highlight the potential online interventions to reach a wider population without notable decrements to efficacy.

In short, we found that a targeted happiness intervention can make people feel healthier. Though consistent across analyses and measures, our findings are, nonetheless, limited, to self-reports of physical health. In fact, we did measure a few basic objective indicators of health, such as BMI and blood pressure. Though some may consider the drop in the BMI of the treatment group from 26.8 at baseline to 25.2 at post-test to be clinically significant, the effect was not statistically significant.

The broader literature on happiness and health by no means suggests that happiness is a panacea for all ailments. Evidence suggests that positive emotions can be particularly beneficial precisely in alleviating symptoms of feeling sick—from pain to cold and flu symptoms—and much less so for reducing weight (Diener, Pressman, Hunter, & Delgadillo-Chase, 2017).

Happiness is no cure-all, but converging evidence—including the evidence from our randomized controlled trial—consistently points to the conclusion that happiness does play a causal role in aspects of our physical health.

Kostadin Kushlev, PhD is an Assistant Professor at Georgetown University.  When Dr. Kushlev first moved to the United States from Bulgaria to pursue his personal happiness, he had no idea that his career path will lead him to study what brings happiness to others. Today, Dr. Kushlev has published in top scientific journals and in prestigious media outlets such as the New York Times. He is passionate about music, dancing, cycling, gardening, and the beach! You can follow or contact Dr. Kushlev on Twitter: @KushlevPhD

Samantha Heintzelman, PhD is an Assistant Professor at Rutgers University. Dr. Heintzelman’s research focuses on subjective well-being, meaning in life, and personality. Her work has been published in top psychology journals and featured widely in the media. In her free time, Dr. Heintzelman enjoys running, playing volleyball, taking in live music and comedy, and traveling. Twitter: @samjheintz

May Kanipayor, MA is a PhD Clinical Psychology student at the University of British Columbia-Okanagan. Ms. Kanipayor has worked primarily with borderline personality disorder and substance use populations. Her research interests include assessment and treatment of borderline personality disorder, cross-cultural variations in psychopathy, quality of life in mental health, development and modifications of psychologically-based interventions, and quantitative/qualitative methods in clinical research. She enjoys taking road trips with her partner and hosting dinners with family and friends.

Damian Leitner, MA is a PhD Clinical Psychology student at the University of British Columbia-Okanagan. His research interests are in emotional and cognitive outcomes following brain injury, as well as happiness and well-being as they relate to personality traits. Prior to graduate school, Damian worked as a psychometrist, a volunteer firefighter, and provided cognitive rehabilitation and case management services for people living with brain injury.

Lesley Lutes, PhD is a Professor and Director of Clinical Training at the University of British Columbia. Dr. Lutes is a registered psychologist whose area of research is in developing innovative behavioral treatment interventions focused on lifestyle change. She developed an evidence-based new treatment approach called small changes, which has resulted in national recognition and awards. Dr. Lutes is happiest when she is spending time with good friends and family, helping others, and hiking with her husband and a 3-year-old son.

Derrick Wirtz, PhD is a Senior Instructor at the University of British Columbia who studies happiness and well-being. Dr. Wirtz has taught psychology in Illinois, Arizona, and North Carolina, where he was recognized as a Distinguished Professor for Teaching and as a Scholar-Teacher award winner. He has authored more than 20 articles and chapters on well-being. Dr. Wirtz is happy when he is hiking and spending time outdoors with his 3-year old son, his wife, and the family dog, Winston.

Ed Diener, PhD is the principal investigator of this research. Dr. Diener has studied happiness for the last 35 years and is known as Dr. Happy. He is often considered the foremost world authority on the science of well-being, having published over 250 articles and books on the topic. Dr. Diener loves research and teaching, but he also loves spending time with his family. His wife and 3 of his children are all psychologists.